BEHIND THE RIFFS: DEEP WATERS

How did the songs of Across the Acheron came to be? Let's take a look behind the riffs.

This song was originally planned to be on Pitch Black, but due to some problems with the time schedule it was left out. Basically Thomas, our friend who plays drums on Pitch Black, was away from Finland – and therefore away from his drum set – and when he finally arrived back to country there really wasn't a lot of time for him to learn the songs, before we needed to already enter the studio and start recording. So as we had 9 songs composed, and 8 is a good amount of tracks for an album, it was decided that we drop one song out and make things a bit easier for Thomas.

I could imagine that it was probably a bit of disappointment for Antti and Jupe that the most "pop-like" song was left out from the debut, but I would say that the song definitely fits better on Across the Acheron. At least now it's accompanied with Cutthroat Game and the overall tone of the album is a bit more melodic.

I played the guitar melody on the intro and outro. When I first recorded that to demo-version of the song, Antti and Mikko were cracking up while listening to it and Mikko basically wondered what Gary Moore -wannabe is playing there. Gary Moore is one of my favorite solo players, if not THE favorite, so a comparison to him is kind of the best thing you can say to me. But my spider-sense told me that this comparison was not meant in a good way and was more about my bit too abundant vibratos. I tried to control myself a bit better while recording the final version.

I think we managed to get a pretty good bass tone on this album and Jupe has said that he appreciates it too. But I do know that there are some parts where the bass should have been a bit more audible and for example in this interlude there is some interesting action going on that gets a bit buried under the wall of sound. I mean the part during the tom pattern, not the part after that, where Jupe plays the same note for 20 seconds. Although Jupe himself would describe the latter part as "difficult stuff".

I still don't really know if I like the chorus' vocal melody or not. Sometimes I do and sometimes I hope I would've come up with something else. But at least I think the second part of the last chorus has a really nice vocal melody and it works as a great climax before the outro.

Lyrics were not ready when the song was planned to be recorded on Pitch Black. I maybe had like a line or a couple back in 2015, when the song was called Shadow's Gone, but I wrote everything again from a scratch during the long Across the Acheron -creation process. I would have wanted to make a lyric video for Deep Waters because I think I have a good idea for the visualization of the song. But, due to our budget restrictions the video was left undone. Maybe we'll get it done in the 10th anniversary of the album or something. 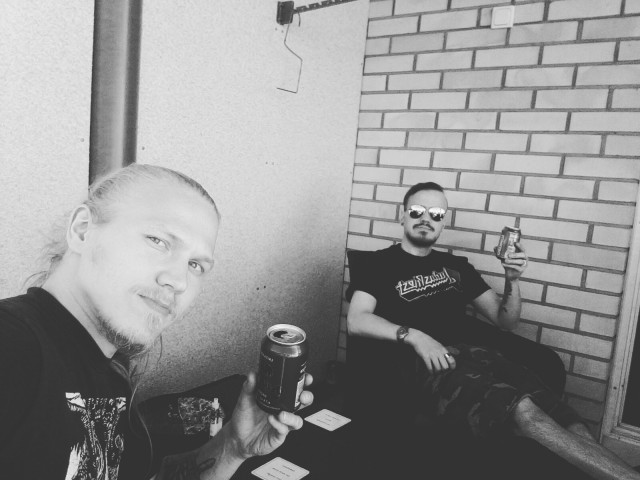 By accepting you will be accessing a service provided by a third-party external to https://www.rifftera.com/